The collection of Old Russian artworks of the Belozersk Regional Museum of Local Lore is unique. Very accurate words about our collection are said by art historian A. Rybakov in the catalog of the Vologda branch of the All-Russia Center of Arts, Science and Restoration named after academician I. Grabar:

“The ancient town in the Russian North, Belozersk, was unlucky in museum construction. During its more than 1000-year history, the town experienced an era of prosperity as the capital of the Belozersk Principality, then died out from a deadly epidemic and moved to another place. It was ravaged either by the Novgorod ushkuiniki, or by the dashing Polish-Lithuanian detachments. The town became either a distant outskirts of the Novgorod province, or a part of the Leningrad region, and the Leningrad museum workers took out of it a lot of what was still valuable... The current Belozersk Museum arose already in the last quarter of the 20th century. By this time, all the estates, temples and monasteries that existed in the town and its district were liquidated or destroyed... Now the Belozersk Museum picks up only crumbs from the luxurious historical and artistic feast of the Belozersk area.”

The bulk of the collection was formed in the 1970s. Some of the items were collected by the local history study group of High School No. 2. Its collection later served as the beginning of the folk museum, and then the state museum. A feature of this source is that it is unknown where and from whom the artifacts came.

A few artifacts of church antiquity were obtained during the expeditions trips of the museum employees in the Belozersk district (Paninskaya, Georgievskoye, Vizma areas), Vashkinsky district and as a result of collecting work. Residents of the town and the region handed over to the museum both house and temple icons saved from destruction in 1920-1930 during the looting of churches.

Among the collectors who donated artifacts of ancient Russian painting to the museum, one can name S. Klyuev, Novokemsky settlement, F. Tyulin, A. Vasenichev from Belozersk.

The latest additions to the museum are gifts from the local Orthodox religious organization of the parish of the Church of the Assumption of the Mother of God in the town of Belozersk.

Sources of Old Russian items received by the Museum

Unfortunately, not all owners of valuables could convey the history of objects to us. Therefore, those artefacts which owners we know and the churches from which the icons were saved are so important.

The iconostasis of the Transfiguration Cathedral is complete, consisting of 38 icons and 24 sculptures, as well as amazing carvings, wonderful design of icon cases, cartouches, and an altar canopy. The iconostasis represented by 3 rows – local, festive and passionate – has 22 icons dated the early 19th  century and 1 icon copy. 14 icons of the 17th – 19th centuries should be in icon cases on walls and pillars. Only 5 of them and the canvas from the altar canopy are placed in the exposition. Sculptural images of angels, compositions are located at all levels of the iconostasis, the completion of which is the "Revelation to John the Theologian".

Most recently, in 2012, the iconostasis was supplemented with a copy of the icon "Our Lady of Belozerskaya Tenderness", made by artist-restorer M. Bushuev from St. Petersburg.

The Church of Elijah the Prophet is a wonderful monument of wooden architecture; almost the entire iconostasis, which is now in the Kirillo-Belozersky Museum, has been preserved in it. Our collection contains oil paintings of the late 18th century on removable canvases of the sky of the quadrangle, the icon of the Almighty, painted details of the church portal.

The Church of the All-Merciful Savior is one of the most beautiful churches in the town. Only a single photograph with a general view of the interior of the church has survived. In the photograph of 1909, made by S. Prokudin-Gorsky, we see the royal gates with bas-relief images. The Royal Gates and the Fatherland Icon are the only items of the rich decoration of the Church of the All-Merciful Savior that have survived to this day.

Our collection also contains objects from two rural churches: Nikolo-Ostrovskaya and Uspenskaya. Both of these temples were monastic in antiquity. The complex of the Nikolo-Ostrovskaya Church is represented by monuments of the 18th – 20th centuries, including a wonderful sculpture "Guardian Angel", a sculpture "Angel's Head", a tombstone icon depicting Jesus Christ and an icon "The Miracle of George about the Serpent", a carved column from the interior. It is noteworthy that all these items came at different times from different people. The sculpture of the guardian angel was purchased from T. Bibiksarova, a resident of Belozersk, the heads of angels were received from the local history study group, the tombstone and the column were handed over by N. Serova, a resident of Belozersk, and the icon "The Miracle of George about the Serpent" was brought by the museum staff as a result of an expeditionary trip to Vatamanovo village and received from M. Petrova.

Monuments of the 16th – 19th centuries originate from the Assumption Church of Andoga, the most ancient of which is the icon “Assumption of the Mother of God (cloudy)”, as well as the icon “Our Lady of Bogolyubskaya with upcoming saints” and a banner. The items were discovered during the expedition by G. Alekseeva, L. Nikanorova, A. Kuznetsova in Paninskaya and Vizma villages in 1988, purchased from a resident of the village of Rogozino Ilya Kuzmin.

3 icons come from the Vashkinsky district. These are “The Almighty on the Throne”, “Alexander Nevsky” and “The Nativity of John the Baptist”.

Churches which icons and sculptures are kept in the Museum

The icons are made mainly on wood, partly on canvas, some of them are on paper glued to a wooden base, and one icon is made on metal (the icon "The Virgin and Child", 150 x 33 in size, was handed over by T. Dalskaya, it may have been used by the owners as a table top with the image down, thanks to which it was saved). The sizes of the icons are varied, depending on the place of use, from 11 x 8 cm to 214 x 160 cm. Their shapes are rectangular, round, oval and curly.

The icons presented in the collection reflect all the most important Orthodox characters and plots.

The classification from the Icons of Russia website was taken as an example: http://www.iconrussia.ru/

There are some icons with images of local saints such as:

The category of others includes icons from the passion row and icons crowning wall icon cases with scenes on biblical themes: “The Assurance of Thomas”, “The Myrrh-Bearing Women at the Holy Sepulcher”, “The Parable of the Reasonable and Foolish Virgins”, etc.

In addition to icons and sculptures, our collection includes single specimens of banners, royal gates, an altar canopy with canvas, a candlestick "Skinny Candle", a stand for shrines.

Many artifacts are in need of restoration.

It is also interesting that in the collection of oil paintings, represented mainly by paintings from the 1960-2010s, we also find a fragment of the item of ancient Russian painting. The painting "The Mound of Sineus" by Belozersk amateur artist I. Vsevolodov (1947-1976), teacher of High School 2, made on the back of a canvas depicting apparently saints. On the surface darkened from drying oil, a gray-haired old man with a crown on his head and a female head are visible.

Although the collection of ancient Russian artworks of the Belozersk Regional Museum of Local Lore includes not so many items it attracts the attention of art historians. A few artefacts were introduced into scientific circulation. So, the Belozeriye almanac, vol. 2, has A. Trifanova's material on the iconostasis of the Transfiguration Cathedral, an article by O. Sokolova about the icon “Assumption of the Virgin (cloudy)” is published in volume 3, the Thematic Issue No. 5 of the Bulletin of the Kirillo-Belozersky Museum, 2008, includes an article by I. Luzhinskaya “Colorized graphics in works of church folk art of the late 17th – early 18th centuries” about the painting of the portal of the Elias Church. We hope that the work on research, study, acquisition of the collection will be continued. 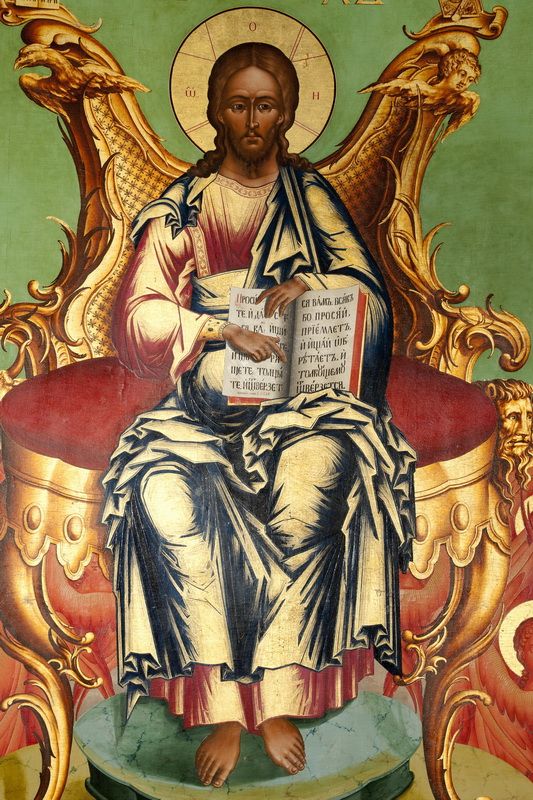 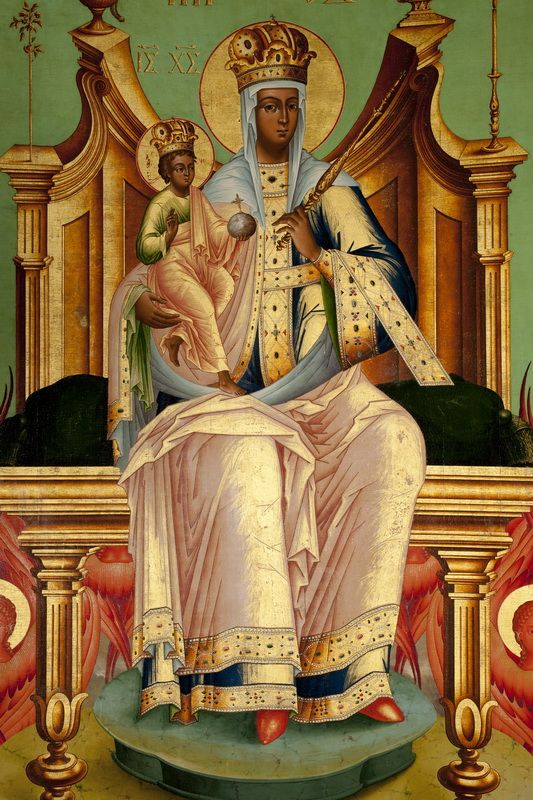 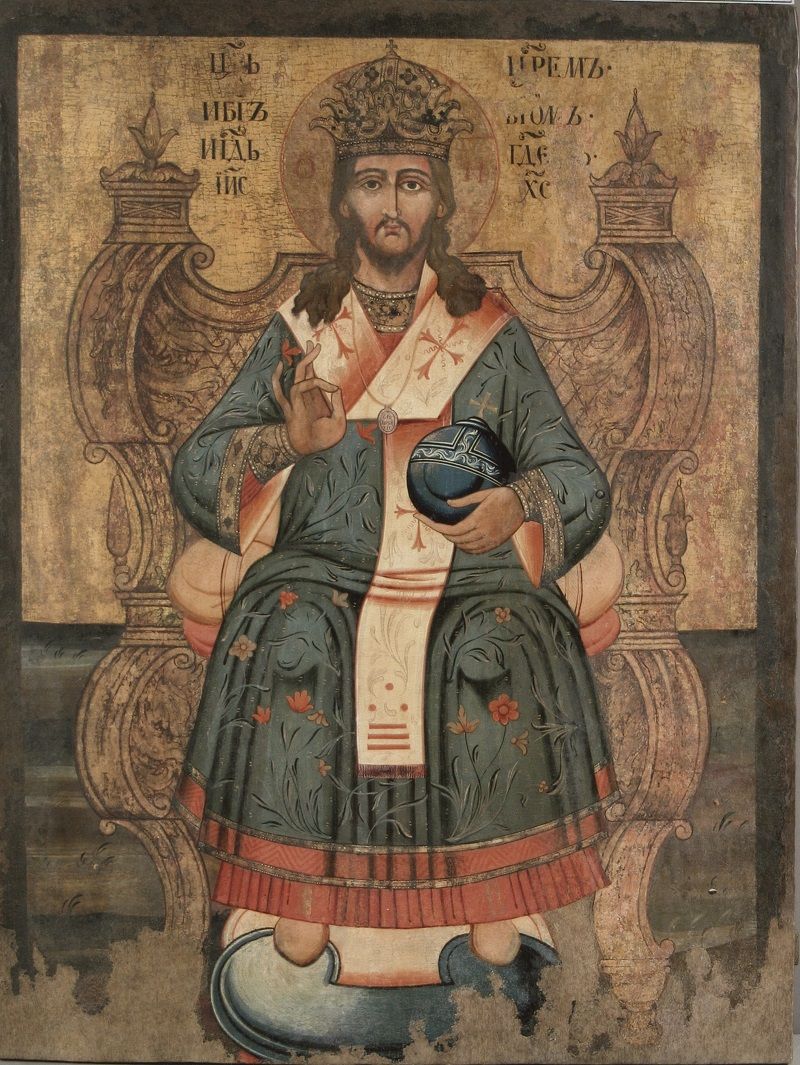