The Battle of Kulikovo. The great dead as viewed by contemporary artists

In 1980, the delegation from Belozersk took part in the celebrations in Moscow and brought a lot of souvenirs from there. Books, brochures, a collection of badges, commemorative medals were among them.

The design of badges is quite interesting. A series of four badges is designed in the same style. They have an oval shape with a red ribbon with the name of the battle at the top and a red shield with the inscription: "600 years" at the bottom against the background of an old Russian ornament. The main field of the deep green badge is given to the heroes of the battle and celebration: Dmitry Donskoy, Peresvet and Chelubey, the Russian army, the monument in honor of the victory on the Kulikovo field.

The badges are solemn and bright. Red and bronze colors, silhouettes of riders, spears, arrows, shields: a minimum of items from those distant centuries convey the era and significance of the event.

Commemorative medals are more informative. They just need to be looked at and read.

The medal designed by A.A. Korolyuk, a master from Leningrad, is embossed and dark bronze in color. Its front side represents Dmitry Donskoy with his army and the back one demonstrates horsemen, foot soldiers in a single impulse and movement. These people are different: some of them are in armor, others wear usual clothes, some have spears in their hands, others have horns, oval or round sharp shields. The artist characterized this united army by the following phrase: “From the beginning, the Russian power has never been like this”.

Unfortunately, not all medal designers are known to us.

The BOKM 5814/8 medal depicts the figure of a Russian warrior in armor wearing a helmet and a mail jacket. The defender of the Russian land firmly holds the sword in his hands. His is wearing a dressy shirt, his beard is curling. The look of this young man is strict and resolute. And behind him we can see regiments standing in dense and friendly lines gathered under the banner of Duke Dmitry Ivanovich. There is an inscription known to everyone on the edge of the medal: “Whoever comes to us with a sword will die by the sword. The Russian land stands and will stand on that”.

The badges and medals were designed for the anniversary of the Battle of Kulikovo.

The collection of graphics includes wonderful engravings by Sergey Kharlamov which were donated to the museum by architect M. Kudryavtsev from Moscow.

Brief information about the artist: Sergey Kharlamov, People’s Artist of Russia, Secretary of the Board of the Russian Association of Artists, Professor, was born in the town of Kashira, Moscow region, in 1942. He graduated from high school in 1959 and the Moscow School of Art and Industry in 1966. Sergey Kharlamov is a winner of all-Russia competitions in book illustrations. His famous works include illustrations to such books as Evenings on a Farm near Dikanka by N. Gogol, Odes by G. Derzhavin, My Bells by A. Tolstoy, The Thief by L. Leonova, I Wake Up before Sunrise by M. Prishvin, The Sonnet Sequence by V. Soloukhin, The Book of Sonnets by Rasul Gamzatov, and illustrations to poems by Fedor Tyutchev and Sergey Yesenin. Literator Yury Seleznyov wrote the following: “Rare in skill, filigree technique, engravings by Sergey Kharlamov give joy with the quiet music of light shining in the book as it were the very word of the illustrated writer…”. His cycle of engravings dedicated to the 600th anniversary of the Battle of Kulikovo (1980) is a phenomenon in cultural and social life.

Sergey Kharlamov’s On the Kulikovo Field series includes 6 engravings in total. The Seeding Time and The Chronicler shall be added to the above ones. The images are accompanied by quotations from chronicles. For example, one of them representing a woman and a teenager in a field has the following words from Zadonschina: “Oh lark, summer bird, joy of red days, fly under the blue skies, look at the powerful city of Moscow… Horses neigh in Moscow, Russian glory rings throughout the Russian land”.

Artists from Belozersk also paid attention to this battle in their works of art.

Yevgeny Timoshkin created the For Great Ancient Russia painting in 2003, i.e. the scene of seeing-off the  armed force to the battlefield.

Yevgeny Ministrov devoted some works of art to the Battle of Kulikovo, including a painting which is very similar to Yevgeny Timoshkin’s work of art.

The On the Field of Kulikovo engraving depicts horsemen in "great armor and military horses equipped under them" against the backdrop of the temple. The front horsemen are holding the icon of Our Lady of the Sign in their hands. So the Belozersk squad led by Duke Fedor Romanovich goes to battle. And as a confirmation of his idea, the artist places the coat of arms of the town of Belozersk at the top.

The badges and commemorative medals as well as Yevgeny Timoshkin’s painting are exhibited in the History of Belozersk Museum. The engravings are exhibited on a regular basis, people can often see them visiting the exhibitions. We are sure that the Battle of Kulikovo will inspire to study works of art of those who are not indifferent to the history of our country. 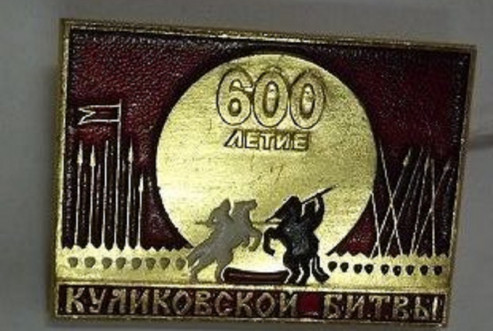 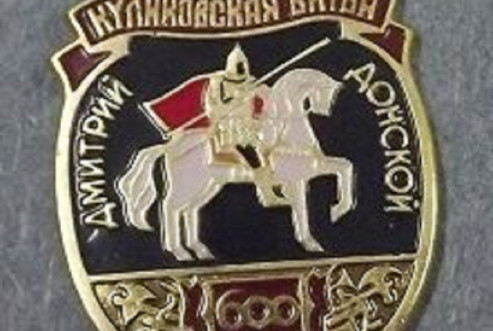 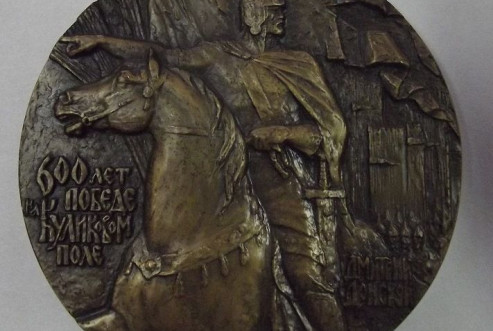 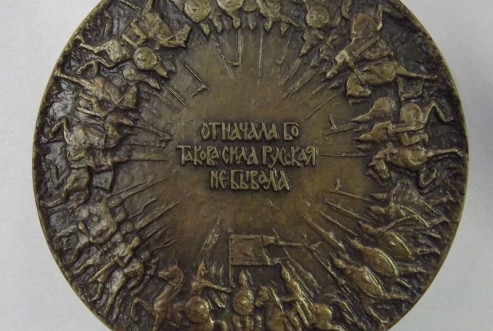 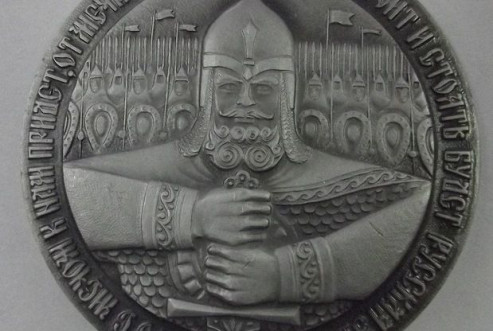 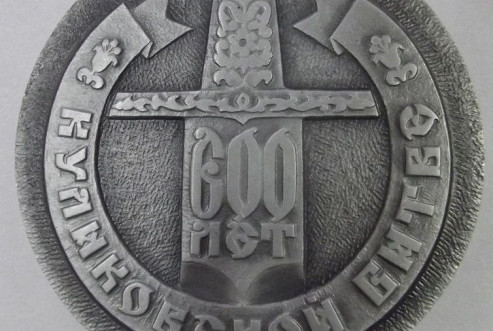 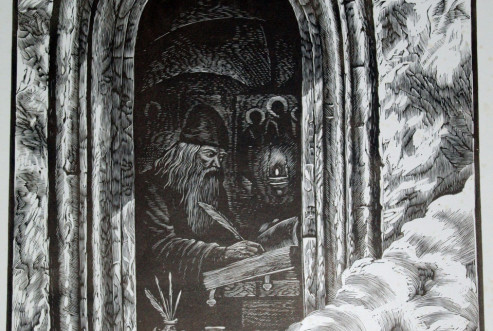 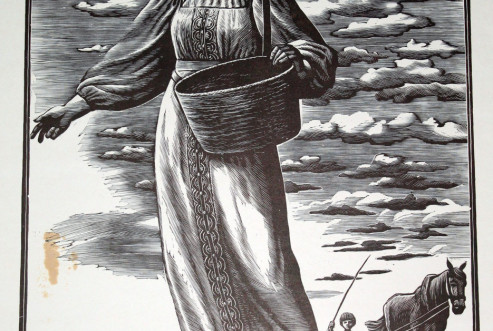 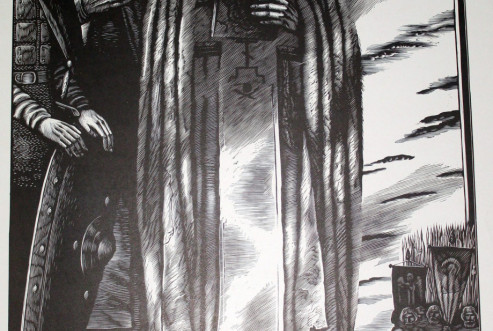 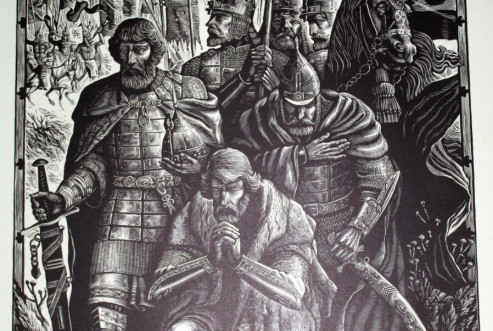 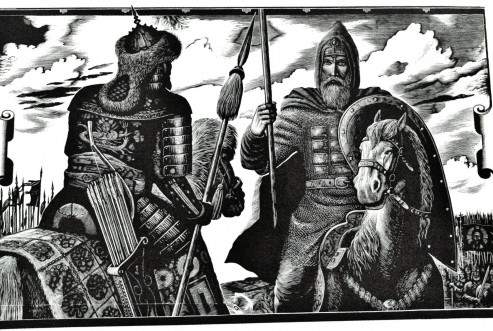 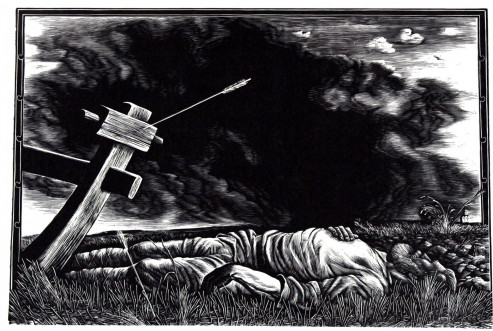 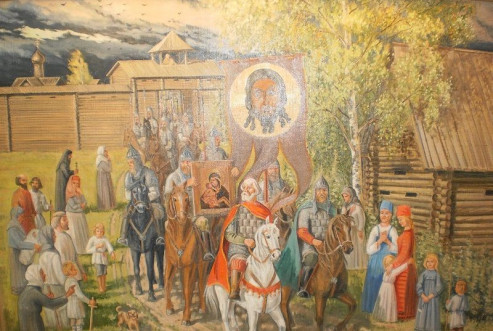 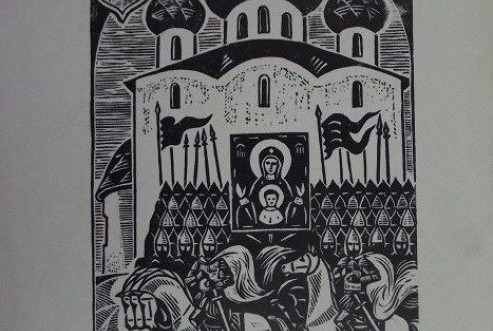